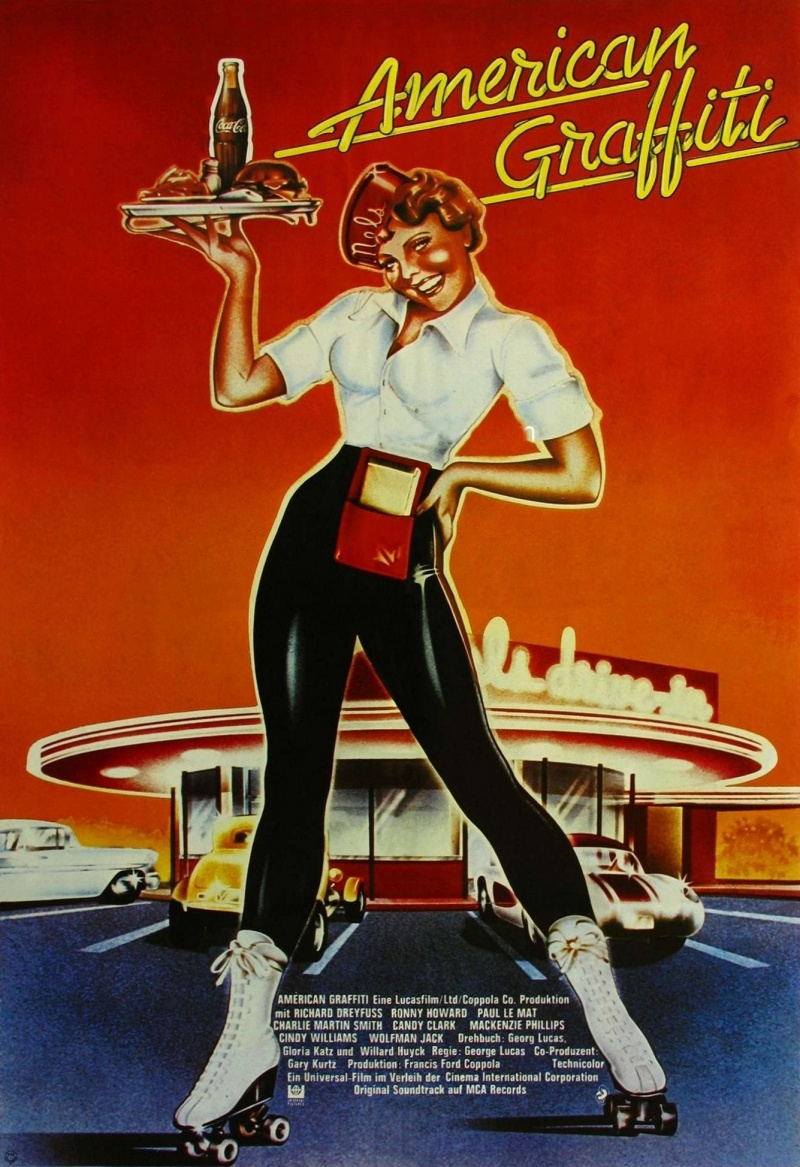 One night in 1962... California teenagers Steve Bolander and Kurt Henderson had just finished school and was going to go to the East coast to go to College. Steve is in love with his sister Laurie Kurt, and the young is difficult to leave each other. Kurt has not found love, but he saw in the street gorgeous blonde, and is now trying to find her. Their friend, undefeated racer John Milner is in the night alone with an underage girl, Carol, stubbornly unwilling to leave the new acquaintance. Many gay and sad has happened to the guys.

After the incredible success of "easy rider" (1969) Dennis hopper, the company "Universal Studios" has helped five young filmmakers make "semi-independent" movie, with a budget of just below a million dollars, hoping for greater returns. It was decided not to create interference during operation and to allow yourself to mount the films. In addition to Lucas lucky Peter Fund ("Hand in hire", 1971), re Dennis hopper ("the Last movie", 1971), Milos Forman ("Separation", 1971) and Douglas Trumbull ("Silent flight", 1972).

Harrison Ford proposed to cut more hair for the role of a dashing racer Bob Falfa. Ford refused, citing the fact that the role is too small for such victims. Instead, he offered to hide hair Bob under a cowboy hat.

Accident Terry fields was not planned in the script. Just played Terry Charles Martin Smith during the filming of lost control of the moped and could not stop it, but Lucas managed to capture the episode on camera.

Cindy Williams wanted to play Carol, and even ordered the brackets on the teeth – that she saw my hero. However, Williams got the role of Lori Henderson, and Carol was played by Mackenzie Phillips.

For the film took about 300 cars, was made after 1962. The creators gave in a newspaper ad, and on the set brought thousands of various vintage cars.

The shooting of the film took 29 days. Almost the entire film was shot at night.

Debut role in the movie, Kathleen Quinlan. She appears in one scene with Ron Howard

Lucas wanted to film 80 rock ' n ' roll hits of 1950-60's. Alas, the budget allowed to acquire rights to only 45 songs, and – due to the fact that the producer has agreed to be Francis Ford Coppola.

Coppola did not like Lucas invented the name "American graffiti". He tried to persuade him to change the name to "Another long night in Modesto" or "Rock on the block". To persuade failed.

Popular disc jockey Wolfman Jack played himself in fact. Lucas himself invited him for this role because he was in love with his radio, when I was still in school.